I Have IH Campaign Reveals Patient and Supporter Perspectives

Idiopathic hypersomnia (IH) is a debilitating neurologic sleep disorder characterized by chronic excessive daytime sleepiness, prolonged, non-restorative nighttime sleep, cognitive impairment and severe sleep inertia.1,2 As IH is not common or widely understood, people face challenges in managing their condition as the diagnosis is often delayed by many years.

To address the low understanding of the condition, Jazz partnered with the Hypersomnia Foundation to launch I Have IH, a disease awareness campaign aimed at increasing knowledge of IH.

As part of the campaign, Jazz and the Hypersomnia Foundation surveyed healthcare providers to measure their perceptions and knowledge of IH. Results from this survey showed that there is a low understanding of IH among physicians, underscoring the need for more education and awareness. Jazz and the Hypersomnia Foundation also sought different perspectives from the community, surveying both people living with this disorder as well as their supporters, to learn the condition’s true impact on the lives of people with IH.

This second survey, conducted between June 10 and July 2, 2021, included a nationally representative sample of patients (n=290) living with IH and supporters (n=49) caring for individuals diagnosed with IH. The patient population was comprised of 88% female and 9% male respondents, with over 50% of those surveyed between the ages of 25 and 44 years old. The race/origin of patients surveyed included White/Caucasian (88%), Bi/Multi-Racial (4%), Hispanic/Latino (2%), Black/African American (2%), Asian (1%) and Native American (1%). The supporter population was composed of 73% female and 22% male respondents, with over half of the respondents between the ages of 25 and 64. The race/origin of supporters surveyed included White/Caucasian (84%), Asian (4%), Bi/Multi-Racial (2%), Black/African American (2%), and Native American (2%).

“The Hypersomnia Foundation is dedicated to supporting and advocating for those living with IH and related sleep disorders. The results of this survey unveil important discoveries of the numerous barriers in a patient’s idiopathic hypersomnia diagnosis journey, including misdiagnosis and lack of understanding by the healthcare community,” said Darrel Drobnich, chief executive officer of the Hypersomnia Foundation. “We look forward to furthering our partnership with Jazz in order to increase awareness and reduce time to diagnosis for everyone living with this debilitating sleep disorder.”

Results from the patient and supporter surveys revealed that one of the issues people with IH face when seeking care for their symptoms at onset is receiving an accurate diagnosis. Oftentimes, patients are faced with challenges and delays in their journey to a diagnosis, which can cause detrimental effects on their lives.

A strong majority of patients (91%) and supporters (90%) also said IH is often under-recognized and underdiagnosed, with 67% of each group saying that there were unreasonable delays in getting to a diagnosis. 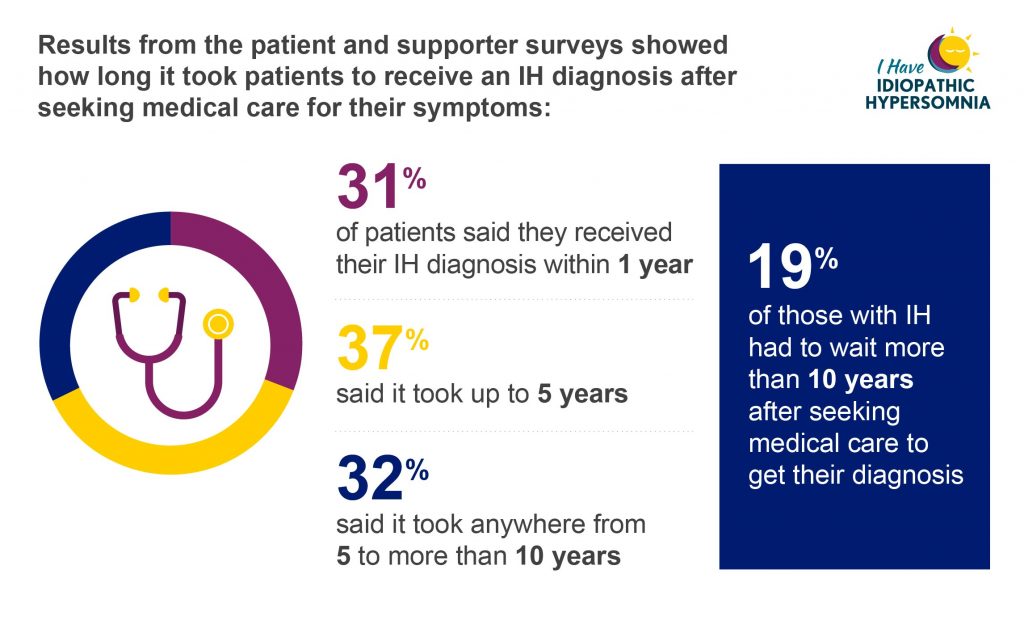 Interestingly the healthcare provider survey found that 87% of surveyed physicians stated that diagnosing IH can be challenging. In fact, more than half of them (57%) reported that they had personally misdiagnosed IH as another condition before providing the correct diagnosis. 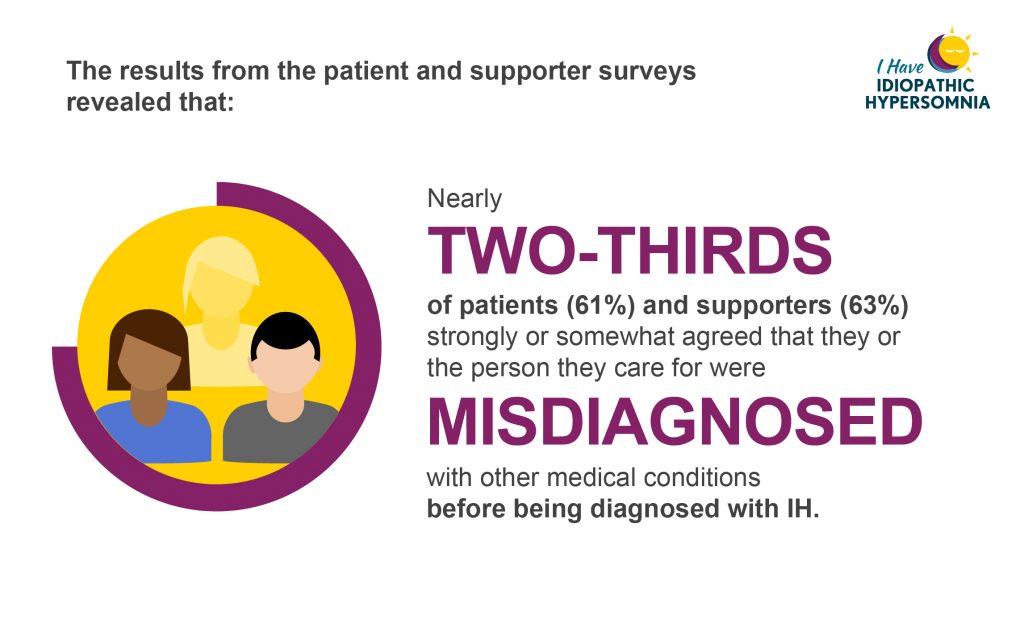 Results from the patient and supporter surveys revealed common instances of misdiagnosis within the community, with 19% of people with IH reporting being misdiagnosed with depression and/or anxiety and 53% saying they have both IH and depression and/or anxiety diagnoses. Also, 8% of people with IH said they were misdiagnosed with sleep apnea and 18% reported having both IH and sleep apnea diagnoses. Further, most patients and their supporters said they or the person they support are frustrated with their experience of the diagnostic journey (78% and 90%, respectively).

While about half of patient respondents (56%) reported feeling understood by family and friends, they overwhelmingly feel misunderstood by the healthcare community (70%) and the general public (92%). Patients were also cynical about the future, with about half indicating they are not optimistic about the future in either the near- or long-term. 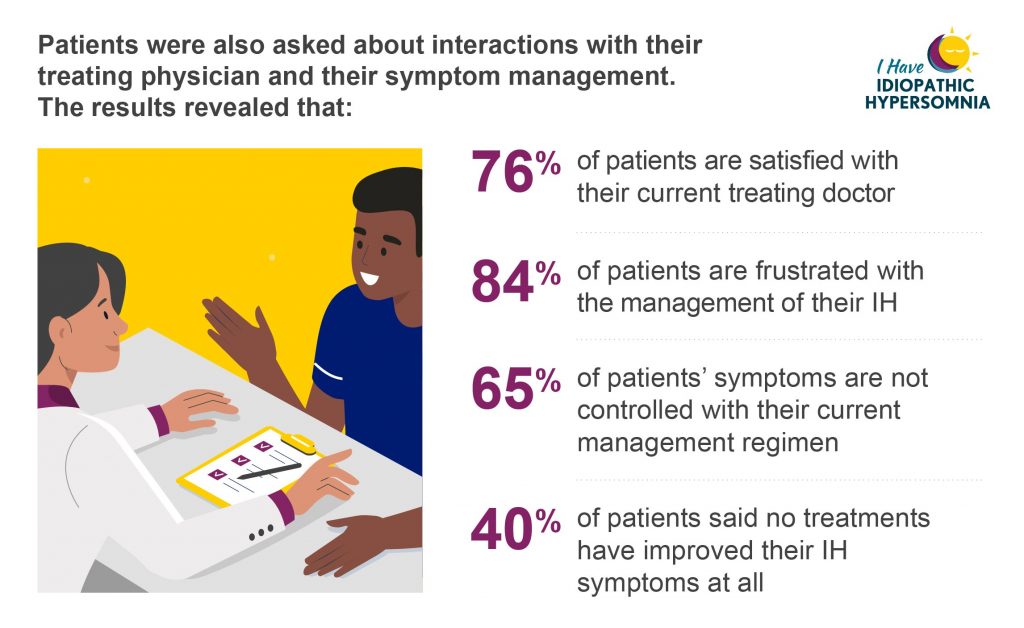 “Here at Jazz, we believe all people, including those who live with complex conditions, deserve to be understood by the healthcare community and provided with effective therapeutic options,” said Rob Iannone, M.D., M.S.C.E., executive vice president, global head of research and development of Jazz Pharmaceuticals. “We’re proud to be partnering with the Hypersomnia Foundation to raise awareness of idiopathic hypersomnia and look forward to continuing our efforts. We know people are counting on us, and we take that responsibility seriously—it guides the decisions we make and how we conduct our business.”

Jazz and the Hypersomnia Foundation are committed to bringing more awareness to IH and other serious sleep disorders and helping people with these conditions at every stage of their journey—from education and diagnosis to treatment and patient assistance.

The Hypersomnia Foundation engages, informs and champions our global community to improve the lives of people with idiopathic hypersomnia and related sleep disorders.

Jazz Pharmaceuticals plc (NASDAQ: JAZZ) is a global biopharmaceutical company whose purpose is to innovate to transform the lives of patients and their families. We are dedicated to developing life-changing medicines for people with serious diseases—often with limited or no therapeutic options. We have a diverse portfolio of marketed medicines and novel product candidates, from early- to late-stage development, in neuroscience and oncology. Within these therapeutic areas, we are identifying new options for patients by actively exploring small molecules and biologics, and through innovative delivery technologies and cannabinoid science. Jazz is headquartered in Dublin, Ireland and has employees around the globe, serving patients in nearly 75 countries. For more information, please visit www.jazzpharmaceuticals.com and follow @JazzPharma on Twitter.

The information on this page is intended for visitors in

Thank you for visiting JazzPharma.com. The site you are about to visit is maintained by a third party who is solely responsible for its content; Jazz Pharmaceuticals is not responsible for the content or privacy practices of any third-party websites. Click Cancel to return or OK to continue.

You are now leaving www.JazzPharma.com. Thank you for visiting. The information on the website you are entering is intended for visitors in the United States only.